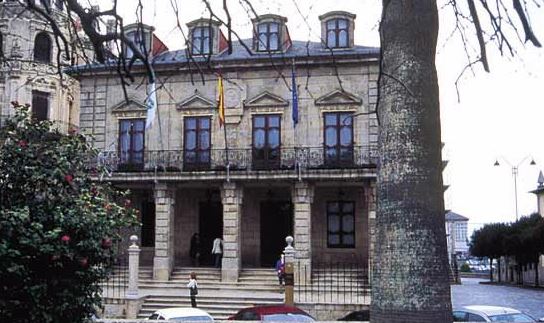 It is a ‘pazo’ of the 18th century in a neoclassical style, ordered by Antonio Raimundo Ibáñez to be his main residence.

It has rectangular ground floor, two storeys high and a loft. It is built with granite masonry and with a slate hipped roof, a five pilasters porch on the main façade and four balconies with triangular pediments. The balcony balustrade, in an Isabelline style, was made in Sargadelos when it was a foundry. Above these balconies we can see the coat of arms of Ribadeo.

After the death of Ibáñez in 1809 the family is arrested and taken to Figueras, so the house would suffer several lootings, it was used for a time as barracks and even as prison.

Well into the 19th century, the house is bought by the trader Antonio Casas, renamed as ‘Casa de Casas’ or ‘de Arriba’, in contrast to the named ‘Casa de Abaixo’, property of Francisco Antonio de Bengoechea. They were the most important shipowners and bankers in Ribadeo and also political rivals, as Casas was member of the conservative party and Bengoechea of the liberal party.

In 1936 the building is temporally turned into a military hospital during the Civil War. After the war is finished, it is bought by the town council and the municipal headquarters are set up here.